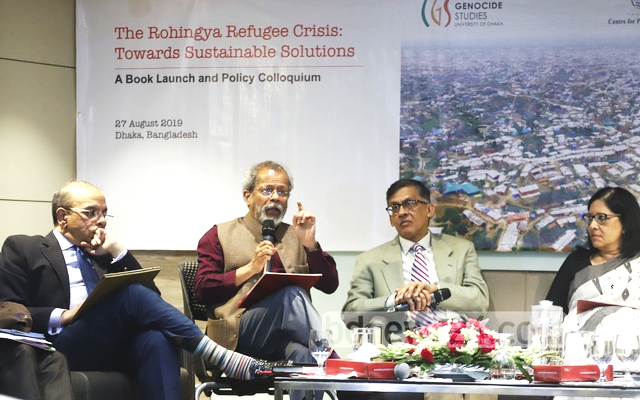 Dhaka University’s Professor of International Relations Prof Imtiaz Ahmed has said Myanmar is staging a ‘drama’ in the name of repatriating the forcibly displaced Rohingyas as they feel they have ‘some important’ countries in the region in their ‘pocket’.

“They think they have at least three countries in their pocket, so they think, ‘what can Bangladesh do?” he remarked, naming China, India and Japan, at a discussion on the two years of the latest Rohingya crisis on Tuesday.

A book edited by Prof Imtiaz, the director at the Center for Genocide Studies at the Dhaka University, was also unveiled at the event. He suggested a five-pronged approach to solve the crisis involving political, economic, cultural, technological and geo-political pushes.

On the geo-political aspect, he said it is his personal opinion that in the last three or four days, what has happened was just a charade. Myanmar agreed to start taking back Rohingyas on Aug 22. But none of the refugees wanted to return as they believe nothing has changed in their place of origin in Rakhine State.

Prof Imtiaz said without changing the law that will allow their safety and security while ensuring full rights, they will not go back. “Myanmar is not serious at all. This is the second year they are playing this drama. I think it’s important to look into those three countries and engage with them in much more creative ways.”

“Our prime minister has done a little bit of that already. She has gone to China and article 19 of the joint declaration clearly points out that the repatriation has to be done and it required China would also play a role.”

“Similar efforts ought to be made with Delhi and Tokyo, given the fact that Bangladesh has excellent relations with all three countries,” he said, adding that the “gaze ought to be on Myanmar”.

UN Resident Coordinator Mia Seppo, who was present at the event, said this is a “complex” crisis and there are “lots of inter-dependent” factors at play when it comes to solutions. She said a sustainable solution cannot be found “overnight”. “It takes time.”

Secretary-Bilateral to the Foreign Ministry Mahbub Uz Zaman said apart from bilateral efforts, they would keep “internationalising” the issue in order to achieve a sustainable solution. He also stressed “accountability and justice” for the safe and the dignified return of the Rohingya to their homeland.

Canadian High Commissioner Benoit Préfontaine said it is very important to get justice for the Rohingya and called for their persecutors to be held accountable.

Justice Syed Refaat Ahmed of the Supreme Court also addressed the event jointly organised by ActionAid Bangladesh, the Centre for Genocide Studies at Dhaka University and the BRAC University.