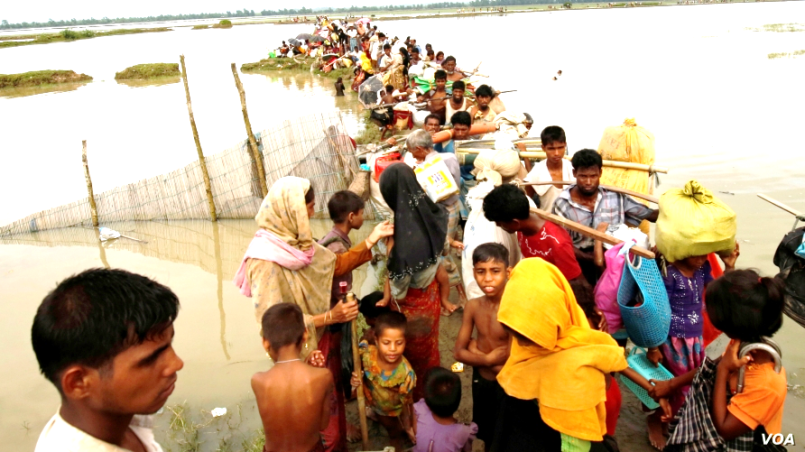 FILE – Rohingya refugees wait for boats to cross a canal after crossing the border through the Naf river in Teknaf, Bangladesh, Sept. 7, 2017.

UNITED NATIONS – A U.N. fact-finding mission has concluded that the Myanmar military intended to perpetrate genocide on ethnic Rohingya Muslims when it drove hundreds of thousands of them from the country in 2017.

The report, released Thursday, also said the government has failed to meet its responsibility under the Genocide Convention to investigate and punish acts of genocide.

“The human rights violations we have been asked to look into, the basic responsibility lies with the Tatmadaw,” Radhika Coomaraswamy, an expert with the mission, said at the release of the report. The Tatmadaw is the Myanmar military.

Radhika Coomaraswamy, a U.N. fact-finding mission expert with the mission, reports the basic responsibility lies with the Tatmadaw on sexual violence against Rohingya.

More than 700,000 Rohingya fled Myanmar’s northern Rakhine state in August and September 2017, after attacks by Rohingya militants against state security forces led to military reprisals. They continue to seek shelter in a refugee camp in neighboring Bangladesh.

The fact-finding mission focused on sexual and gender-based violence, which was widely reported by survivors who reached Bangladesh. 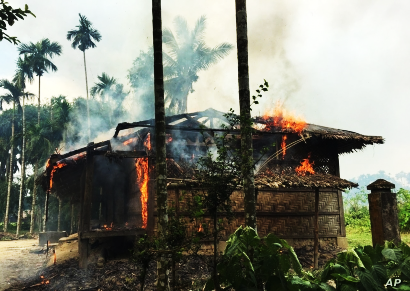 Security forces and allied mobs burned down thousands of homes in the area, where the vast majority of the country’s 1.1 million Rohingya had lived.

It concluded that the Tatmadaw indicated its “genocidal intent” against the Muslim minority group by “deliberately inflicting on the Rohingya women and girls conditions of life calculated to bring about the destruction of the Rohingya in whole or in part.” This included the widespread and systematic murder and gang rape of females of reproductive age, mutilation of or injury to their reproductive organs, and attacks on pregnant women and babies.

The report also said that such violence against civilians was only possible “in a climate of long-standing tolerance and impunity, where military personnel had no reasonable fear of punishment or disciplinary action.”

The fact-finding mission, which was mandated by the U.N. Human Rights Council, was not allowed into Myanmar. It interviewed 300 survivors and witnesses outside the country, who also included experts on sexual violence.

“Our general overarching recommendation is the need for security sector reform under civilian oversight of the Tatmadaw,” Coomaraswamy said.

She said one aspect of the military’s power is its independent economic interests.

“There are conglomerates, companies, run by the military, and a network of businesses — primarily local, but also international — that went into joint ventures and others with the Tatmadaw,” she said. “We are not saying not to do business in Myanmar. We are just saying only with the Tatmadaw.”

Coomaraswamy said there should be accountability, which she suggests could either be a hybrid court or the International Criminal Court. “We don’t really feel domestic remedies are possible in Myanmar,” she said.

Meanwhile, efforts to start sending small groups of Rohingya home from Bangladesh are stalled.  The U.N. refugee agency has surveyed a group of 3,400 Rohingya refugees, whose names have been approved by the government for return, about whether they want to go back to Myanmar.

“So far, none of those interviewed have indicated a willingness to repatriate at this time,” U.N. spokesman Stephane Dujarric said Thursday. “Many of the refugees stated that they do hope to go home to Myanmar as soon as conditions allow and that assurances regarding their citizenship status, freedom of movement and security in Myanmar could be provided.”