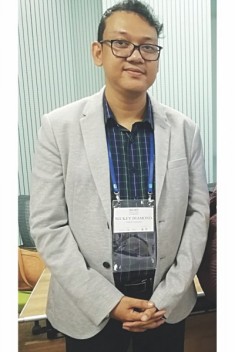 Law Desk (LD): How do you see the present Rohingya crisis?

Nickey Diamond (ND): From the Myanmar government policies and practices, it has appeared that the recent Rohingya crisis is the outcome of a very systematic but unjust and authoritarian rule. The example is the citizenship law of 1982 by which the right to citizenship of the Rohingyas was arbitrarily taken away, although the 1947’s post-independence Constitution of Myanmar and the 1948 Union Citizen Act recognised the Rohingyas as one of the ethnic communities in the country. Later, 1974 and 2008 Constitutions of Myanmar did not recognise the Rohingyas as being the citizens and ethnic community. Constitutional fabric and citizenship law together made the Rohingyas a stateless population. However, the problem is not of the law and policies only. Discriminatory practices of the government also contributed to the making of the present crisis. Once the right to citizenship was denied to the Rohingyas, they became stateless and could not enjoy their basic human rights. To me, it’s not a recent issue but a several-decade long issue and the government continues to ignore it. The military leaders and their previous regime considered the Rohingyas as the ‘illegal immigrants from Bangladesh’ and recently after the 2017 August crackdown they said that the ‘Bengali problem’ is unfinished business. This is the kind of unfortunate scenario what I see on the face of the Rohingya crisis.

LD: Can you illustrate the patterns of discrimination against the Rohingyas which basically facilitated the state-led persecution in 2017?

ND: We have been documenting Rohingya suppression in northern Rakhine for a long time. Since 2012, they have been forced to live in concentration camps under strict surveillance of the security forces. They could not go out of the camp and did not live like other communities with individual freedom and liberty. They could not even go to another village. They were subjected to movement restrictions and needed special permission to get married and have children. In 2016, we witnessed some systematic execution of government policies. For example, protective fences around the Rohingya houses were removed, and knives and other sharp implements (basically used for agriculture purposes) were confiscated. Security patrols, house searches and cases of beatings, theft and extortion gradually increased. In 2017, the oppression grew more violent and the Rohingyas became defenceless. The kind of measure adopted by the Myanmar state apparatus, I consider, facilitated the 2012 violence which was a kind of preparation for undertaking a larger attack and displacement in August 2017 and committing a crime of genocide against the Rohingya ethnic minority group.

LD: Will you reflect on any propaganda used by the perpetrators?

ND: Institutionalised discrimination in the past and also the Buddhist nationalism played a role in the making of the crisis. Most of the political leaders and monks made propaganda that Buddhism, Buddhists, and Buddhist-nation are under attack by the Muslim Rohingyas who are, to them, the ‘Bengali population’ and ‘illegal immigrants’ to Myanmar. This kind of religious intolerance and indoctrination through ideology into the body-politic of the state made the Rohingyas more vulnerable and the victims of state atrocities. Ordinary people truly believed in all these radical ideologies and became a part of state-led persecution of the Rohingyas. This kind of radicalisation and abuse of religion had been going on for several decades in Myanmar and one of the problems centring the present Rohingya crisis.

LD: Do you believe that a terrorist organisation like Arakan Rohingya Salvation Army (ARSA) exists?

ND: I have talked to the Rohingya community leaders several times on different occasions. They always tell me that an organisation like ARSA may exist, but they do not support any kind of armed struggle or armed conflict. They truly believe in seeking their ethnic identity, restoration of citizenship rights and peaceful co-existence in Myanmar. In a situation of decade-long discrimination and deprivation by the state, it is no wonder that some external forces like terrorist organisations might have tried to mobilise and radicalise ordinary Rohingyas. It is possible that some potential situation may have driven few of them – may be a hundred or so – to fall into the trap of radicalisation. However, the majority Rohingya population believe that an armed struggle cannot bring any real solution to the crisis.

LD: What is your expectation from the international community?

ND: I am a little sceptical about the international response and action regarding the Rohingya crisis. The international community is taking time and seeking legal justification under international law to act for solving the Rohingya crisis. We need to understand that it is a case of mass atrocity, millions of people are displaced and have already become a humanitarian burden for another state, i.e. Bangladesh. The situation requires immediate global action responsive to the crisis, specially in terms of holding the perpetrators accountable under international criminal law. Though the Chief Prosecutor of the International Criminal Court (ICC) has taken an initiative to investigate into the matter, the Court is itself struggling with different political challenges which actually frustrate us who are time and again raising our voices to ensure justice for the Rohingyas. Apart from this criminal justice aspect, the issue of reparation and repatriation is also a big issue right now to the crisis since most of the perpetrators are now in power in Myanmar. In such a situation, it is very difficult to ensure accountability of the perpetrators and justice for the Rohingyas. The question is – under what basis and confidence the Rohingya people will return to their homeland, unless a tangible assurance is given and a visible measure is taken by the government in power. Since the perpetrators are still in power and they are not taking the responsibility of the safety of the Rohingyas, the chances remain that they might again violate and kill these Rohingya people on their return to Myanmar. Hence, a potential danger exists even in future to the crisis.

LD: Thank you for your time.

ND: You are welcome.