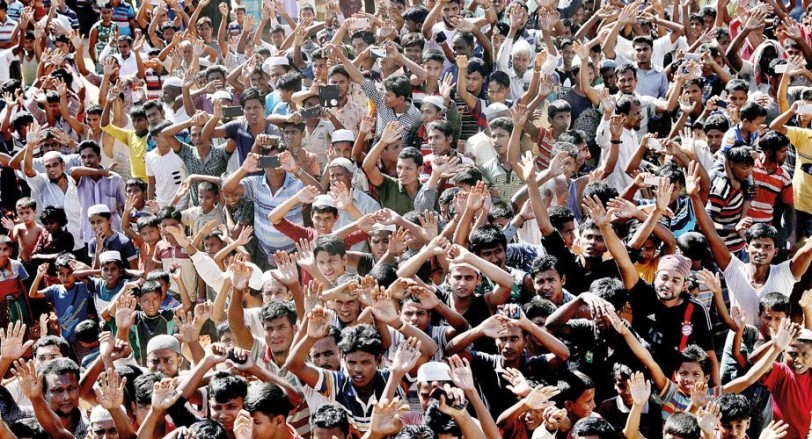 File photo: Hundreds of Rohingya refugees shout slogans as they protest against their repatriation at the Unchiprang camp in Teknaf, Cox’s Bazar on November 15, 2018 REUTERS

The date and agenda of the dialogue are yet to be fixed, but the Rohingya community leaders made it known that they want the dialogue as soon as possible

The first ever formal interaction between the government of Myanmar and the leaders of the Rohingya communities since the latest exodus that began in late August, 2017 ended in Cox’s Bazar on Saturday without any major breakthrough.

However, both sides have agreed to initiate a dialogue to discuss all the critical aspects of the crisis, especially, providing full citizenship to the Rohingyas. The date and agenda of the dialogue are yet to be fixed, but the Rohingya community leaders made it known that they want the dialogue as soon as possible.

The Myanmar delegation, comprising of 12 officials from Naypyidaw, and five from Asean countries, will sit again on Sunday with 35 Rohingya community leaders, including seven women, at the same venue– the extension of Kutupalong Rohingya camp-4.

The Rohingyas will also sit separately with the Asean officials. “The objective of these meetings is to fix the agenda, and time for the dialogue,” a source deeply engaged with the issue told Dhaka Tribune. Officials of the Bangladesh government were also present at the meeting but they did not take part in the discussions. 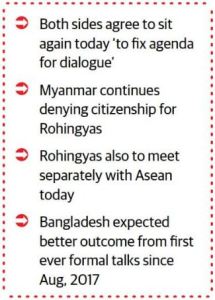 However, they said that they expected a much better outcome from the meeting. “We were the facilitators. Our stance has been that it is a problem between the Myanmar government, and the Rohingyas, and they should solve it among themselves,” said Abul Kalam, Refugee Relief And Rehabilitation commissioner based in Cox’s Bazar, the top government official at the ground level in dealing with the crisis.

About the outcome, he said: “[It was] Not bad but it could be better.” “I actually expected much better than what has happened,” said a senior Foreign Ministry official, who was present at the meeting.

Both the officials opined that the Myanmar government, and the Rohingya community appear to have felt the necessity of talking to each other seriously on the critical issues, so as to find a solution.

However, they warned that both sides are still worlds apart on many aspects, which may lead to a solution to the problem. It is the Myanmar government that will have to take necessary measures to pave the way to implement the recommendations of the Kofi Annan Commission, which includes providing citizenship to the Rohingyas, said the officials, adding that, that is still a long way to go.

They were of the opinion that if citizenship is given to them, which they deserve, the problem will be all but resolved.  At times during the interaction, the atmosphere got acrimonious particularly due to assertive attitude of some Rohingya representatives on different issues, including their future places of residence, and justice for the atrocities, sources present at the meeting told this correspondent after it ended.

At the interaction, the Myanmar delegation gave a presentation projecting that Rakhine is safe for living now, and the demand of citizenship of the Rohingyas will be addressed step by step beginning with the filling-in of Citizenship Verification Card.

The Rohingyas refused to return to their homes under the current situation but expressed eagerness to return as soon as their citizenship will be agreed upon. “The Myanmar government is still denying our citizenship without which we cannot return, and we will not return,” Deen Mohammad, a community leader, said.

There were more than 140 villages where the Rohingyas used to live in Rakhine, but the delegation has said that the government can rehabilitate them only in 42 villages, he said, terming it “unacceptable.”

“We want to go back [home] from where we were driven away,” he said. “After what we have been through, there is no reason to believe the government of Myanmar.  We will not return until all the issues, including that of our citizenship, are not addressed,” said Mohammad Jubayer, another Rohingya leader.

Replying to a question, he said that it is likely that the Myanmar government is holding the day’s meeting, keeping in mind the upcoming United Nations General Assembly where the issue will be discussed. “Perhaps, it is the international pressure that is leading them to hold this interaction,” he added.

To another question, Jubayer said that they have asked to hold the dialogue as soon as possible, and they want the involvement of Asean, the UN, and other international organizations. “We do want to return to our homes. We don’t want to live here. But, we will only return under a verified circumstances,” he said.

Arifur Rahman, another community leader, said: “What the Myanmar government delegation said on Wednesday is unacceptable. We were citizens of Myanmar before, which was repealed. Why do we now have to go step by step again to have the citizenship?”

“We don’t believe in the words of the Myanmar government. We want to get our problems solved. And, it is unlikely to be solved without active, and long-term involvement of the international community,” he said. Although the authorities earlier said that the Myanmar delegation will speak to the media, they did not talk to reporters yesterday.