A Cox’s Bazar-based organisation of Rohingyas has issued a warning to the United Nations and the ASEAN that there would be no repatriation to Myanmar without consulting the Rohingyas staying in Bangladesh. 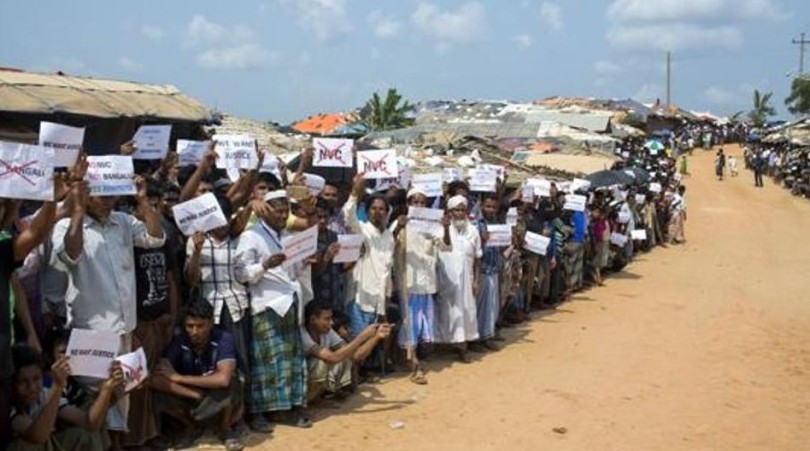 Rohingya Refugees protesting for their demands before repatriation

The Arakan Rohingya Society for Peace and Human Rights in a statement on Saturday said they want to make it clear to the world that the ASEAN and the UNHCR do not speak on behalf of the Rohingya refugees. Rohingya refugees are enough to speak for themselves and there would be no repatriation without consulting them, said the statement.

The organisation came up with their reaction a day after an AFP report based on leaked document that suggested that the Association of Southeast Asian Nations said Myanmar would only accept 5,00,000 out of 1 million Rohingyas in two years, ignoring an ongoing insurgency in Rakhine state and failing to identify the persecuted community by their chosen name.

The leaked report, penned by the Southeast Asian bloc’s ‘Emergency Response and Assessment Team’ (Asean-ERAT) and seen by AFP, is expected to be released in the coming weeks.

In the statement, the ARSPHR said, ‘The ASEAN report also does not use our ethnic name: Rohingya.’ It said representatives of many ASEAN countries like Malaysia and Indonesia visit the camps, take photo with them and call them Rohingya. ‘But now they refuse to give us dignity. Why is ASEAN not using our ethnic name?’

‘The UN has estimated 7,25,000 Rohingya fled violence and persecution in Myanmar in 2017 and 2018. So, we want to ask what will ASEAN and Myanmar will do about other 5,00,000 Rohingya refugees in Bangladesh?’ the statement read.

‘Just like the recent extension of the secret MoU among Myanmar, UNDP and UNHCR, Rohingya refugee leaders are not being consulted about the decision that directly affects our human rights. Why is it so difficult for ASEAN and the UN to consult us and respect our human rights and dignity?’ the statement read.

The Rohingya group said, ‘the ASEAN report congratulates Myanmar for increase the security forces in Rakhine state. Rohingyas have been victims of genocide by Myanmar security forces for decades. What will ASEAN and Myanmar do to stop these forces from continuing the genocide against Rohingyas when we return home?’

The ARSPHR said, ‘We know the answer to all of these three questions. The ASEAN and the UN view Rohingya issue as a crisis and problem. They do not consider us as human being with rights and dignity’. Since August 25, 2017, over 7 lakh Rohingya fled Myanmar while some 3,00,000 others who had fled earlier waves of violence in Myanmar where they have been denied citizenship since 1982.