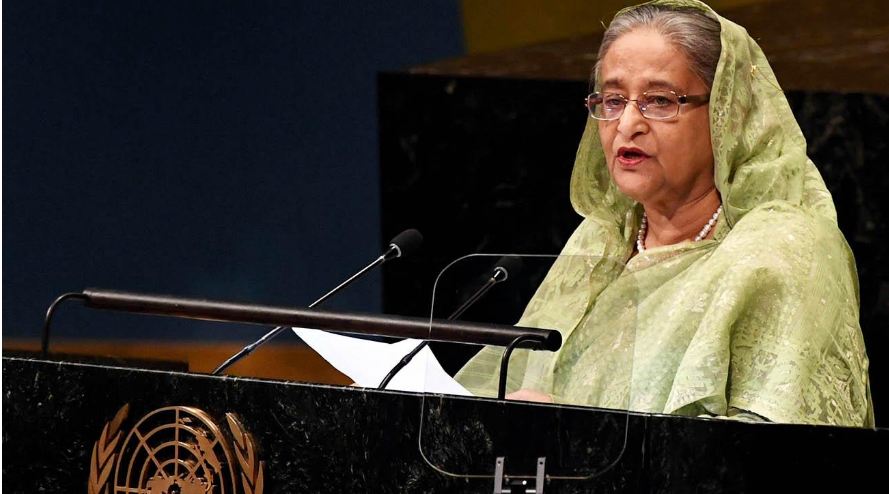 Prime Minister Sheikh Hasina has demanded immediate and effective implementation of the Myanmar-UN agreement on the solution to Rohingya crisis which is putting immense socioeconomic pressure on Bangladesh.

Addressing the 73rd UN General Assembly at the UN headquarters on Thursday, she said the crisis has its origin in Myanmar and its solution also needs to be found there.

The PM said Bangladesh was appalled by what it saw in UN reports about atrocities against the Rohingyas, which are tantamount to genocide and crimes against humanity.

Bangladesh wants an early and peaceful solution to the crisis, she said. “We expect the international community, particularly the UN, to give due importance to the atrocities and injustice suffered by the Rohingya population in Myanmar.” Like the previous years, the PM delivered her speech in Bangla. Hasina said Bangladesh could neither ignore nor remain silent about the Rohingyas’ plight.

She said she presented a five-point proposal at the UN General Assembly last year with a view to finding a durable and peaceful solution to the Rohingya crisis. “We’re disappointed that despite our earnest efforts, we have not been able to begin Rohingya repatriation in a permanent and sustainable manner.”

Mentioning that Myanmar is one of Bangladesh’s neighbours, she said from the outset, Bangladesh had been trying to find a peaceful solution to the Rohingya crisis through bilateral consultations. Bangladesh and Myanmar struck three bilateral deals for Rohingya repatriation, the PM said, adding that despite their verbal commitment to take back Rohingyas, the Myanmar authorities were yet to take them back.

Hasina said 1.1 million Rohingyas have been living in Bangladesh in uncertainty. To the best of its ability, Bangladesh has made arrangements for their food, clothing, healthcare, childcare and security. She said many countries and organisations, including the UN, the Commonwealth, and the Organisation of Islamic Cooperation, have shown solidarity with the Rohingyas and extended support and assistance for them.

Bangladesh started working on a new housing facility with all arrangements for the Rohingyas’ education, healthcare and other needs so that they could live in a good and healthy condition, the PM told the UN. She called upon international organisations to join hands with Bangladesh in this initiative.

Hasina said she could feel the pain of countless people around the world, persecuted and expelled from their homes like the Rohingyas. It is impossible to build peaceful, just and sustainable societies by ignoring such situations, she added.

The PM said the Myanmar situation repeatedly reminded her of the genocide committed by the Pakistan occupation forces against Bangalees in 1971. Describing Bangladesh as the major contributor to world peace, she said the country expects to see a more robust and human rights centric Global Compact for Safe, Regular and Orderly Migration (GCM).

About terrorism, she said Bangladesh stands firm against terrorism and all organised crimes. The country would not allow its territory to be used for any terrorist acts against or any activity detrimental to the interest of its neighbours. She mentioned that Bangladesh’s “whole of society” approach has served well in preventing violent extremism, human trafficking and flow of illicit drugs.

Hasina said Bangladesh has started its journey from being an LDC to becoming a developing country. She said there were large-scale business opportunities in Bangladesh. Foreign investors were being offered various financial incentives, including tax holiday, avoidance of double taxation and exemption of duties.

Terming Bangladesh one of the 10 most vulnerable countries to clime change, the PM said its topography and high density of population have particularly exposed it to climate change risks.

She said Bangladesh remains committed to implementing the Paris Agreement and is spending over 1 percent of its GDP in addressing climate change impacts. “We’re also promoting climate-resilient agriculture. Initiatives have been taken to increase tree coverage from 22 percent to 24 percent in the next five years.”

Bangladesh has integrated its development programmes and its efforts to build a capacity for combatting climate change into a mega project titled Delta Plan 2100. It is the only country to have adopted such a long-term development plan spanning 82 years, she added.

About the Palestine issue, she said Bangladesh was shocked by the continued violation of the rights of the brotherly people of Palestine. “This must come to an end. As the chair of the OIC Council of Foreign Ministers, we shall continue to work with the international community for resolution of the Palestine question.”

Hasina said three elements play the most critical role in advancing human civilization — peace, humanity and development. “For the wellbeing of human societies, we must continue to strive for humanity. Our main objective must be to serve people and ensure their wellbeing. It is humanity and goodwill that would take us forward on the pathway to sustainable development.”

Noting that Bangladesh was once known to the world as the land plagued by disasters, floods, droughts and hunger, she said it has done wonders in maintaining international peace, managing disasters, empowering women and consolidating development gains.

The PM said Bangladesh has surpassed its South Asian neighbours on a number of indicators. “But our journey has not reached its end. Our journey will continue till the day we can build a Bangladesh free of hunger, poverty, illiteracy and exploitation — the Sonar Bangladesh as dreamt by our Father of the Nation Bangabandhu Sheikh Mujibur Rahman.”