Special envoy: We must listen to Rohingya voices

Special envoy: We must listen to Rohingya voices 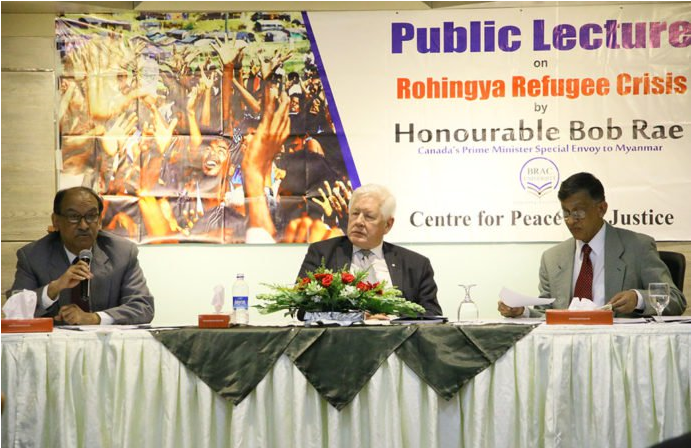 Bob Rae says Myanmar authorities must be held accountable for the crimes committed against the Rohingyas.

Canada’s special envoy to Myanmar Bob Rae has said Rohingyas should only be repatriated after a solution is reached within Myanmar. “The repatriation into the homeland is only going to happen if a solution is possible inside Myanmar. It is in no one’s interest to make this a political crisis.”

Rae shared his analysis of the Rohingya refugee crisis at a public lecture organized by BRAC University’s Centre for Peace and Justice at the BRAC Center Inn in Dhaka on Thursday. He said: “If immediate repatriation is not possible for the reasons we have been discussing, what are we prepared to do is to make the situation in Bangladesh more acceptable to everyone.”

“Myanmar authorities must be held accountable for the crimes committed against the Rohingyas.“There is no impunity. There cannot be any avoidance of responsibility for crimes against humanity,” he said, replying to queries at a press meet following the lecture.

“Those who are liable for breach of international law, including crimes against humanity, should be brought to justice. The crisis at present has emerged as an alarming issue around the world. This refugee crisis is the biggest refugee crisis since the Second World War.”

Describing the pain, risks, and problems of Rohingyas in Bangladesh and Myanmar, Rae said that there are two major risks facing the refugees – one is related to the weather and natural calamity hazards and the other is the increasing needs of the refugees at the camps.“Along with the refugees, the host community is also in trouble. This massive number of refugees is causing disruption to the local host community as well. The humanitarian agencies have to support the hosts as well as the refugees.

“We have a collective responsibility to handle this crisis, to assist the host community, and to send the Rohingyas back to their homeland.” Rae repeatedly said: “Bangladesh is not alone. We all have work together to solve this issue.”

The envoy, who recently submitted a report to the Canadian premier, also said that Canada has to take a leadership role in resolving the Rohingya crisis as there has been a void in global leadership. Referring to his report titled ‘Tell them we are human,’ the special envoy of Canada also said: “We must listen to the voices of the Rohingya themselves. This principle should guide our actions and inform our advocacy.”

Answering journalists’ queries, Rae said that more humanitarian assistance has to be provided to the refugee camps. “The world has to respond more to the current crisis by stepping up humanitarian and development efforts in Bangladesh and Myanmar.

“The humanitarian response should focus on providing humanitarian assistance and education, supporting infrastructure, and mitigating the impact of the violent deportation on Rohingya women and girls by providing strong support to the UN and other international organizations working in the camps.

“Canada is already contributing funds for this. It is not possible for the Government of Bangladesh to bear the burden on its own. All of us have to share the burden for a long term solution to this crisis.”

Brac University Vice-Chancellor Prof Syed Saad Andaleeb, presenting concluding remarks, said: “If a country like Myanmar gets away with such killing and looting, then powerful countries can adopt the same approach to take down ethnic groups.”

“It is high time for the world to coordinate to address this issue,” he added, thanking the Canadian government for playing a decisive role in the Rohingya crisis. Brac University’s Centre for Peace and Justice Executive Director Manzoor Hasan, delivering the welcome speech, said: “This humanitarian crisis has created the largest refugee camp in the world.”