Lone women who head refugee families in Bangladesh struggle with concerns about food, shelter and the welfare of the next generation.

In a plastic-roofed shack near an open sewer, Rohingya refugee widow Sufia Khatun is doing all she can to fend for the family she now heads.

Her husband, Nur Mohammad, was struck with a machete and killed when he went to investigate smoke and commotion in their Myanmar village in late August. After fleeing to Bangladesh, she now provides for their five children, aged 20 and under, and her grandson.

“The main challenge is food … The rations we get every month are not enough to meet our needs, and we have to borrow 10 kilos of rice from our neighbours,” she says, squatting on the floor of the hut, with her three-year-old grandson Mohammad Hossen in her lap.

More than 687,000 refugees from Myanmar have fled to Bangladesh since August. Sufia, 48, is among some 31,000 refugee women who head their households, many of them widows whose husbands were killed or are missing in Myanmar.

They face intimidating challenges as they start over in the pop-up city of rickety bamboo shelters, now the world’s largest refugee settlement.

“They are women now, and I’m afraid to send them out.”

Mother-of-eight Khatemunnesa, 40, lives in shack made of bamboo and plastic sheeting. Her husband Rahmat Ullah, 50, was killed when a mob set fire to her home village and killed six months ago. She frets about the looming wet season and how she will prepare her fragile home for the monsoon without Rahmat and her son-in-law, whom she saw attacked in her front yard as she fled for her life. 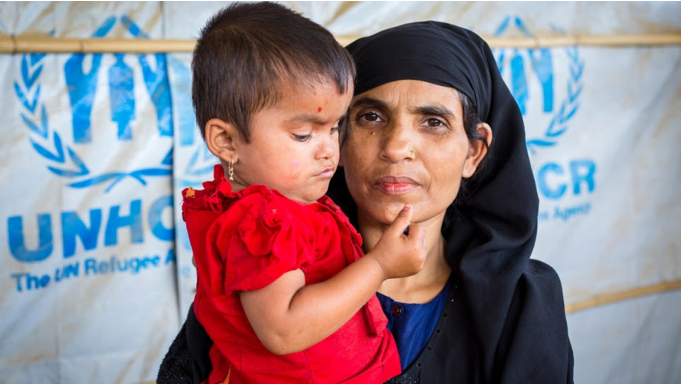 “Strengthening the shelter is something that my husband would have taken care of before, and now, with the monsoon coming, I have to do it myself,” she says.

Others have different concerns. Rehena Begum, 45, says she needs firewood for cooking but fears sending her teenage daughters out to gather increasingly scarce fuel in the scrub around the settlement, which she considers unsafe.

“They are women now, and I’m afraid to send them out,” she says of the girls aged 17 and 18. “They were already terrified by the violence in Myanmar. They witnessed indignities,” she says, alluding to rape and sexual assault, “and I am afraid for them if they go out.”

In the vast settlement, which has a population greater than France’s third largest city, Lyon, the difference between just surviving and achieving the stability to resume their lives is continually in the balance.

To tip the scales, the Bangladeshi government, supported by UNHCR, the UN Refugee Agency, and its partners, is working to provide widows like Sufia, Khatemunnesa and Rehena with aid and support, as well as to restore the self-belief often destroyed with the homes, loved ones and lives lost in Myanmar. 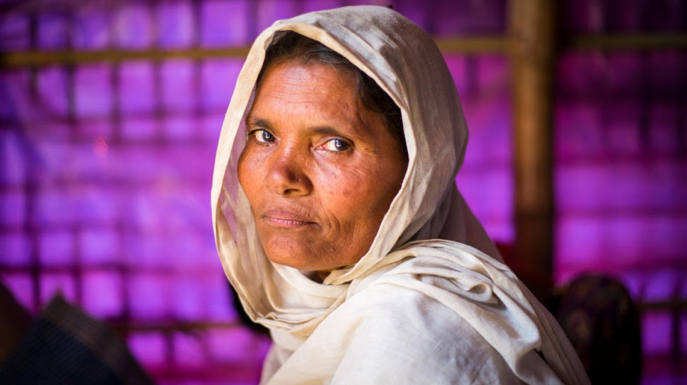 Sufia Khatun provides for her five children aged 20 and under and her grandson.
© UNHCR/Roger Arnold

“It is very important to give refugee women, particularly widows and single mothers, back the strength that they had before to cope and run a family,” says UNHCR protection associate Shirin Aktar. “We have to empower them, we have to provide them with skills and give them the confidence and dignity to go on with their lives, because we will not be there to provide support always.”

It is estimated that about 16 per cent of Rohingya refugee families in Bangladesh are headed by single mothers.            The Bangladeshi government, UNHCR and other partners are providing a range of assistance, including more secure shelter, health care, counselling and access to women-friendly and child-friendly spaces. Training workshops are available to help women learn skills and earn vital income by sewing, making soap or toothpaste.

“We have to provide them with skills … to go on with their lives.”

For those who struggle to carry heavy aid packages or need help in relocating in the camp, refugee volunteers are available to carry bags and boxes. Volunteers also help widows and others who need help to refurbish their shelters with bamboo and tarpaulins to withstand the monsoon.

After a volunteer directed Khatemunnesa to an information point where she spoke to UNHCR and staff from aid partner Technical Assistance Inc, she says she learned about training for the first time and would like to learn to sew.

Sufia also had a chance to talk to UNHCR staff about her concerns and heard about livelihoods training. “I feel better after explaining my situation,” she says. “Once you can earn money, you can lead the life you want,” she says.

Back in her shelter, which she has made homely with a floral drape and floor mats, Sufia opens up about the hopes she has for her grandson Mohammad Hossen. She wants him to study hard “so he can prosper.”  Little by little, she starts to smile.

“I have to be positive because, if I allow myself to worry too much, then death will grab me,” she says. “You have to be hopeful. It’s vital.”