Genocide, development and the Myanmar spin

Genocide, development and the Myanmar spin 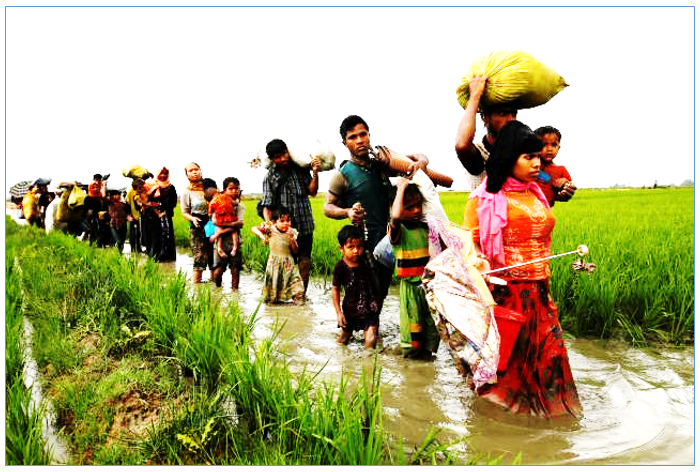 Conversely, Myanmar State Counsellor Aung San Suu Kyi, a former student of Sen at Delhi University, must have instructed her team of Burmese advisers on Rakhine, and their international allies, to treat genocide as a lack of development.

There is, however, only one problem with Team Suu Kyi’s spin. The absence of (economic) development, or poverty, is not known to have led to either genocide or crimes against humanity.

Typically, genocides are planned and carried out by well-fed and well-schooled individuals.  Hitler’s inner circle included Harvard or Hamburg-educated Nazis who wined and dined with the icons of Wall Street, for instance, Mr JP Morgan, who in turn held an honorary doctorate from Oxford.

Genocides, in contrast, are suit crimes. The planning, the execution, the whitewash – all these integral acts of any large-scale state-directed destruction of a targeted minority are done in the nation’s highest offices.

But if one looks at the policy pronouncements coming from the UK government or Team Suu Kyi – headed by the German-educated business specialist Dr Aung Tun Thet and Burmese cronies, one gets the impression that Ms Suu Kyi’s autocratic regime (she is no democrat, not even in the broadest sense of the word) has succeeded in deluding itself into thinking that development is the answer to the “Rakhine crisis”.

Never mind that a few days after the large wave of “security clearance operations” was launched on 26 August 2017, Ms Suu Kyi’s partner in power, Senior General Min Aung Hlaing, openly declared to the country that the presence of Rohingyas in their own ancestral place of Northern Rakhine is “an unfinished business” from WWII during which there were armed clashes between Rohingyas and Rakhine.

For this group of power-hungry Burmese technocrats, there is “no genocide or ethnic cleansing” in Myanmar as Aung Tun Thet was quoted as saying in the New York Times.

To the successive British governments in London, the Oxford-educated Suu Kyi, who was in fact a goddaughter of sorts in the family of the well-known British diplomat late Lord Gore-Booth, was to serve as the Burmese proxy, very friendly to the British interests, however defined.  The Whitehall has tried everything in its power to quarantine Suu Kyi from the growing charges of criminal responsibility as the de facto head of state of its former colony 6000 miles away. Ms Suu Kyi’s official “supporters” in Britain had even wheeled out the elderly Queen and the popular grandson Prince William, to have lunch at Buckingham Palace with the embattled Myanmar leader almost a year ago when her approval ratings nosedived from the world’s best known iconic leader, after Mandela, to potential ICC-material.  Alas, not even the royal aura of the British throne could salvage Suu Kyi’s reputation as the Nobel Peace laureate who is widely viewed as a “genocide collaborator”.

In his apparent desperate move, British Foreign Office’s Junior Minister Mark Field tried his very best as he attempted to offer the well-worn spin of “Myanmar’s democratic transition” with Aung San Suu Kyi as its captain.

In Field’s words, “To achieve a long term resolution to the crisis in Burma, I believe that even in these desperate circumstances the UK must continue to support democratic transition and the promotion of freedom, tolerance and diversity. To do this we must continue to engage, to support attempts to peacefully resolve its many internal conflicts, and bring all parts of the state apparatus under democratic, civilian control.”

Hello?! The Rt Honorable gentleman from FCO, where have you been?

Myanmar genocide is at its “bomb-the-train-track” moment, and the minister in London is still delusional enough to harp on the unbelievable ‘long-term resolution’.  Or he is simply lying? Obviously, Myanmar’s long-term objective – now in its 40th year since it launched its first large-scale pre-ordained and coordinated attack on Rohingyas on 12 Feb 1978 – is to finish the Rohingyas off.    As the Far Eastern Economic Review article in July 1978 observed, Myanmar began its “brand of apartheid” against Rohingyas 40 years ago.

Just yesterday in a public hearing held at the British parliament the parliamentary International Development Committee completely obliterated the British government’s justifications – empirical, moral and intellectual – for empowering Ms Suu Kyi-controlled parliament of Myanmar.  The two programme officers from the Westminster Foundation for Democracy were compelled to admit that the British empowerment programme has produced NOT a single lawmaker, out of hundreds of Myanmar MPs, who stands up for  human rights of the Rohingya.

Westminster Foundation is one of UK’s “soft-power” paddling organisations, which manages millions of British taxpayers’ money in overseas international development projects.    This so-called parliament empowerment programme was established at the request of Suu Kyi since she was sworn in as the country’s de facto head of state, “above the President”, in April 2016.

Mirroring the military’s institutionalised policy of “no Muslim officer” in the armed forces, Ms Suu Kyi had already single-handedly cleansed her ruling NLD party of any Muslim representative.  The NLD-controlled parliament is Muslim-free for the first time since Myanmar had a modern-era legislature in the 1930’s.

As a matter of fact, today’s Myanmar parliament sways to the dictates of either the top military leadership or Ms Suu Kyi, who runs a very tight NLD ship.

Under Ms Suu Kyi’s administration, supposedly being “empowered” by Britain’s Department of International Development, the Burmese parliament has moved into a neo-totalitarian space where ominous bills – for instance, the bill designed to denounce UN Special Rapporteur Yanghee Lee –  were passed with unanimous votes.   The democratic space in the society at large has shrunk drastically:  ironically, the civil society was far more open under the former general Thein Sein’s administration than Suu Kyi’s leadership during the heady days of the “Myanmar Spring”.

It is about time that the likes of British minister Mark Field of the world are called out when they put out empty spins, which are not supported by the painful realities on the ground.

For the government that just inked a US$100 million arms deal with the visiting Crown Prince from Saudi Arabia whose role in the death, destruction and decaying of Yemen – 500,000 reportedly on the verge of starvation – the discourse of its support for ‘democratic transition’ in Myanmar sounds extremely disingenuous.  It is about time that the likes of Mark Field are called out when they put out empty spins in outright contrast to the genocidal realities of the Rohingya people.

But the British officials can be expected to keep on lying about the genocide, whatever their hidden agendas – to the world, to themselves and to their friends in the Parliament.  They will resort to all kinds of humanitarian, democratic, inter-state, or geopolitical discourses – while one million Rohingyas in Bangladesh languish with no future, nor a homeland to which they can return.

For those who have worked to end the genocides in South Sudan, Bosnia or Rwanda, this must be déjà vu.    It is painful to watch these men and women in state offices around the world tell lie after lie, with their diplomatic straight faces.

*Maung Zarni is a Burmese human rights activist, an adviser to the European Centre for the Study of Extremism based in Cambridge, UK and a Non-Resident Fellow at the Sleuk Rith Institute in Cambodia.  He blogs at maungzarni.net