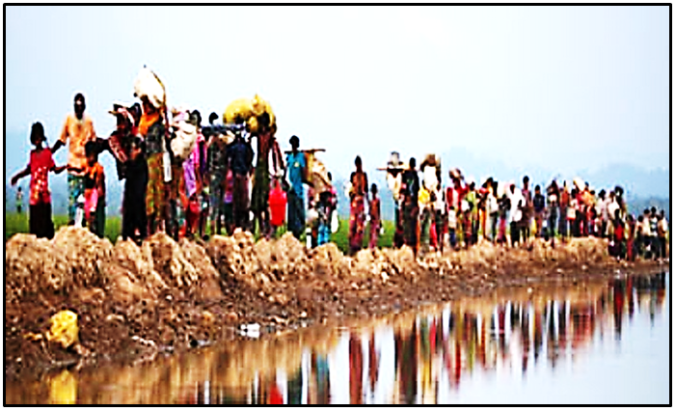 UN member-states on Thursday urged Myanmar authorities to end a military campaign against the Muslim Rohingya in a resolution adopted despite opposition from China, Russia and some regional neighbours.

The General Assembly’s human rights committee overwhelmingly endorsed the measure presented by Muslim countries by a vote of 135 to 10, with 26 countries abstaining. UN member-states said they were “highly alarmed” by the violence and “further alarmed by the disproportionate use of force by the Myanmar forces” against the Rohingya.

The resolution drafted by the Organisation of Islamic Cooperation (OIC) called on the government to allow access for aid workers, ensure the return of all refugees and grant full citizenship rights to the Rohingya. It requested that UN Secretary-General Antonio Guterres appoint a special envoy to Myanmar.

Aside from Russia and China, Cambodia, the Philippines, Laos and Vietnam voted against the measure as did Syria, Zimbabwe and Belarus, along with Myanmar. The non-binding measure now goes to the full assembly for debate next month.More than 600,000 Muslim Rohingya have fled the mainly Buddhist country since the military operation was launched in Rakhine in late August. Myanmar authorities insist the campaign was aimed at rooting out Rohingya militants who attacked police posts on August 25 but the United Nations has said the violence amounted to ethnic cleansing.

Addressing the committee, Saudi Ambassador Abdallah al-Mouallimi said the resolution backed a solution that recognizes the “legitimate rights of Muslim citizens” in Myanmar. Myanmar’s Ambassador Hau Do Suan said his government was “making positive efforts to ease the situation” in Rakhine state, which he said was now “stable.”

Earlier this month, the UN Security Council agreed on a statement calling on Myanmar to “ensure no further excessive use of military force in Rakhine state.” Britain and France had initially proposed that the council adopted a formal resolution on Myanmar but China opposed such a move.

Human Rights Watch said the vote sent “a strong message to Myanmar that the world will not stand by while its military engages in ethnic cleansing against the Rohingya.” Source: AFP