As Myanmar’s Rohingya Crisis Deepens, Here’s How Aung San Suu Kyi Can Save Her Credibility

As Myanmar’s Rohingya Crisis Deepens, Here’s How Aung San Suu Kyi Can Save Her Credibility 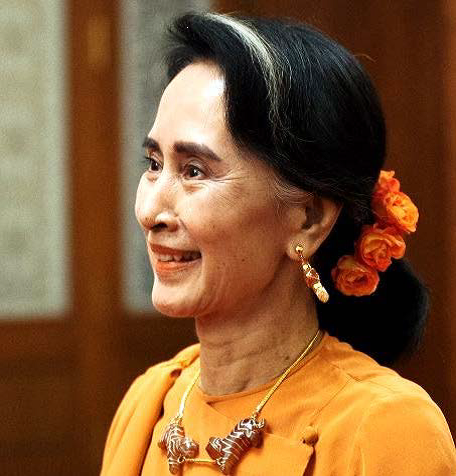 Myanmar State Counsellor Aung San Suu Kyi smiles at the Great Hall of the People on May 16, 2017 in Beijing, China. Nicolas Asfouri—Getty Images

An independent commission chaired by former U.N. Secretary General Kofi Annan made its final recommendations to Myanmar’s government Thursday on easing ethnic and religious unrest in the country’s western Rakhine state. The report, titled Towards a Peaceful, Fair and Prosperous Future for the People of Rakhine, comes amid renewed fears of violence among the Muslim Rohingya and Rakhine Buddhist communities.The election of Aung San Suu Kyi’s party The National League for Democracy (NLD) in late 2015 was widely heralded as a boon for democracy in a country oppressed by decades of military dictatorship. But the Nobel laureate’s tenure as state counselor has been marred by deadly strife in the country’s west.

Following an attack on police outposts by suspected Rohingya militants in October, the Myanmar military launched counter-terrorism operations in Rakhine state’s northern town of Maungdaw. The crackdown led to allegations that the army had committed atrocities against the estimated 1.1 million Rohingya population, a stateless minority that has suffered decades of persecution. After tens of thousands of Rohingya fled into neighboring Bangladesh, bringing with them reports of rape and extra judicial killings at the hands of the Myanmar military, U.N. Special Rapporteur Yanghee Lee warned that the government “may be trying to expel the Rohingya population from the country altogether.”

“The administration must make it clear that for U.S.-Burma relations to improve, Burma must protect the human rights of all its people,” he said.

The below recommendations by the Advisory Commission on Rakhine State, which was set up by Suu Kyi, are derived from the most comprehensive, international study there to date. The Commission urges “concerted action” by the government and all sectors of society, otherwise “we risk the return of another cycle of violence and radicalization, which will further deepen the chronic poverty that afflicts Rakhine State,” Annan said in a statement.

Rakhine state is among the poorest in the country, with high rates of malnutrition and poor access to clean drinking water and sanitation. The Commission recommends the government invest heavily in infrastructure such as roads, electricity, drinking water and internet access to help lift both communities out of poverty. It also calls for local communities’ increased participation in decision-making on issues relating to development.

Create a path to citizenship for the Rohingya

Despite living in the country for generations, Myanmar’s 1982 citizenship law classifies the Rohingya as illegal immigrants from Bangladesh, making them the largest stateless group of people in the world. The Rakhine Commission calls for an acceleration of the ongoing citizenship verification process and greater clarity over the rights of people whose application for citizenship is not accepted.

Longer term, the Commission urges Myanmar to review the citizenship law. It suggests bringing it into line with international standards, re-examining the current linkage between citizenship and ethnicity, and considering provisions to allow for the possibility of acquiring citizenship by naturalization. The committee also recommends greater political representation for ethnic minority groups, stateless and displaced communities.

More than 100,000 mostly Rohingya Muslims still live in squalid encampments for those displaced by communal conflict in the state five years ago. Conditions are unsanitary and there is little to no access to healthcare, education or employment. The Commission recommends closing all displacement camps and, in the interim, ensure “dignified living conditions.”

While the movement of both Buddhists and Muslims is restricted in Rakhine, Muslims and especially the displaced are disproportionately affected. The Commission calls on the government to ensure freedom of movement for all people irrespective of religion, ethnicity, or citizenship status.

Instigate a “calibrated” approach to security

Myanmar has principally relied on security forces to counter the threat posed from potential radicalization. But violent crackdowns have led to more than 70,000 people fleeing the state into neighboring Bangladesh, where they have reported extrajudicial killings, gang rape, and the murder of infants at the hands of the military.

The Commission calls for a “calibrated response that combines political, developmental, security and human rights approaches that address the root causes of violence and reduce inter-communal tensions.” Such measures include streamlining policing units into one agency, providing improved training for security forces in human rights, civilian protection and languages and diversifying its forces to include women and ethnic minorities.

Talks between all communities in the state should be fostered and activities that help create an environment for such dialogue should be initiated by the government, the Commission reports. This could take the form of joint vocational training, cultural events and building communal youth centers.

Ensure the recommendations are actually implemented

The Myanmar government’s response to reports of human rights abuses in Rakhine has been severely criticized for falling short. Suu Kyi has denied that there is ethnic cleansing in the state, her government blocked journalists from the north of Rakhine, and in March she rejected the U.N.’s proposal to send an international fact-finding mission to the country to investigate abuses.

But Suu Kyi has expressed confidence in Kofi Annan’s Commission to heal the “wounds of our people.” In its final point, the Commission calls for the government to appoint a minister tasked with coordinating policy on Rakhine state and implement its directives.

Now that she has the report in her hands, the world will be watching to see if she will follow through on its recommendations.##

Tags : Rohingya Crisis Deepens, Suu Kyi Can Save Her Credibility, counter-terrorism operations in Rakhine state, reports of rape and extra judicial killings, Create a path to citizenship for the Rohingya, Enhance freedom of movement, gang rape, and the murder,

Tagged with: and the murder, counter-terrorism operations in Rakhine state, Create a path to citizenship for the Rohingya, Enhance freedom of movement, gang rape, reports of rape and extra judicial killings, Rohingya Crisis Deepens, Suu Kyi Can Save Her Credibility
Posted in International, Media, Myanmar, Report, Rohingya