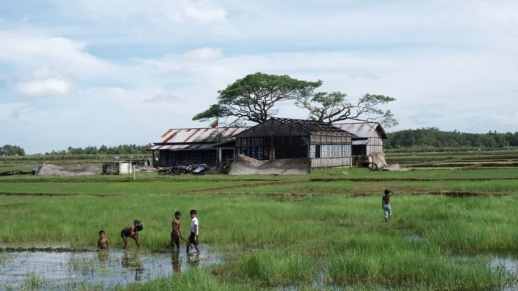 Hemmed in by Myanmar security forces and menaced by abductions and killings, Rohingya Muslims in a conflict-scarred corner of Rakhine State say fear is one of the few constants in their lives.

Last week foreign media were given partial access to the isolated wedge of the northwestern state for the first time since security forces launched a months-long operation to root out militants who attacked border police posts.
The UN wants to establish if that campaign amounted to ethnic cleansing after accounts of mass rape, killing and arson emerged from Rohingya who fled to neighbouring Bangladesh.

For those left behind in the rattan-walled frontier villages the violence and insecurity is unrelenting, locals told reporters, under the watch of Myanmar border forces who steered the visit.

“Our husbands are on the run. They left us because they are afraid of border guard police,” one Rohingya woman told AFP, requesting anonymity for safety reasons. “They burned our house. We have no home and nothing to eat. Our husbands are hiding somewhere.”

The large-scale military operation has abated but the area remains in lockdown, with sporadic killings by military patrols still intent on rooting out “terrorists”.

The UN believes hundreds may have died in what may be the bloodiest chapter of Buddhist-majority Myanmar’s years-long persecution of the Rohingya Muslims. The minority are widely reviled as illegal migrants from Bangladesh, although many Rohingya families say their ancestors have lived in the area for generations.

Now a new peril has emerged: scores of local men have been abducted and murdered by unknown gangs of knife-wielding men, with state media reporting they are dressed in black and often wearing masks.  Authorities say the assassins are targeting leaders from the Muslim minority and anyone perceived to be a state collaborator. They blame Rohingya militants for the murders.

International Crisis Group analyst Richard Horsey says some 60 people may have been targeted in a “systematic” campaign “to take out Muslims who are in some way connected to, or perceived to be connected to, authorities”.

In an area stained by mistrust and rumour it is unclear who is behind the attacks—and the fear is intensifying in the face of almost daily reports of killings. Earlier this month unidentified men dragged father-of-six Atthu Suwan from the bed he was sharing with his wife in Maung Hnama village.

They stabbed the 44-year-old, who occasionally worked as a translator for local officials, and carried his body into the darkness, his family and friends told reporters on the government-run press trip. “I haven’t even been able to eat since they took my son,” his elderly mother Moeyeyan Khatu said, her face etched with sadness.

On Monday state media reported his body had been found abandoned in a nearby creek. “We are fearful it (the killings) will happen again,” his neighbour, 67-year-old Hanumyar, told AFP.

The government blames the attacks on the self-styled Arakan Rohingya Salvation Army (ARSA), a newly formed Rohingya militant group. The group denies any involvment, instead accusing the military in statements issued through an unverified Twitter account.

They do however claim the raids on police border posts last October. The raids sparked the months-long “clearance operation” by the military which sent more than 70 000 fleeing into Bangladesh.

Rohingya escapees shared harrowing accounts of security officers  slaughtering babies, burning people alive and gang-raping women—abuses UN investigators said may amount to crimes against humanity. The army denies the claims and says its response was proportionate in the face of terrorist interlopers. But the crackdown sparked global opprobrium and the UN has commissioned a fact-finding mission to probe the violence.

Rock and a hard place

Myanmar has refused to cooperate with the probe, denying the investigators visas. Unable to leave because of travel restrictions and abject poverty, Rohingya villagers say they are trapped between an oppressive state and vengeful militants.

Adding to the climate of fear, death threats and fatwas (Islamic religious rulings) have circulated on social media aimed at anyone who dares to stand against the militants, according to several analysts and Rohingya sources.
On the media visit, officials sought to play down the military’s campaign—and the murders. Police Brigadier General San Lwin, chief of Rakhine’s state police, said some of the killings might relate to “personal grudges” and not militancy.

But locals say they are now frightened to take official posts in case they too become targets. A 35-year-old Muslim man, recently appointed as a household head in Tinmay village, said his predecessor was killed in April after talking to local reporters. “I do not sleep at home,” he added, requesting anonymity. “I sleep at a police outpost with security.” – Agence France-Presse ##