She was speaking to visiting United Nations High Commissioner for Refugees Filippo Grandi at her parliament office on Sunday. 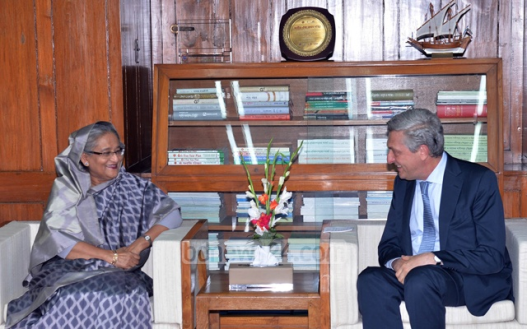 Prime Minister Sheikh Hasina has urged the UNHCR and others in the international community to pursue Myanmar to take back Rohingya refugees from Bangladesh. Photo PID

The prime minister said the ‘only and ultimate’ solution to the prolonged refugee problem is to ensure a ‘sustainable repatriation’ of the Myanmar nationals to their country, the Prime Minister’s Press Secretary Ihsanul Karim told reporters.

“Myanmar should create a congenial atmosphere for the repatriation of its refugees from Bangladesh,” he quoted her as saying in the meeting.

The prime minister said the Myanmar refugee problem has only added to the socioeconomic problems to Bangladesh.

She said her government identified some island areas for rehabilitation of the Myanmar refugees and planned to build necessary infrastructures, shelter, schools and hospitals for them.

The prime minister said Bangladesh had an insurgency problem in the Chittagong Hill Tracts, but the problem was ‘ultimately’ solved trough bilateral discussions.

“We brought back our nationals who took refuge in India,” she said.

Sheikh Hasina reiterated her government’s ‘firm’ stance on stopping foreign insurgents from using Bangladesh’s soil. She said Bangladesh has good relations with all the neighbouring countries, including Myanmar.

She recalled the visit of the Myanmar security advisor to Bangladesh and said both countries are continuing discussions on economic development.

“Bangladesh needs full appreciation and recognition for the sacrifice it is making for the Rohingya refugees,” the PM’s press secretary quoted him as saying.

Grandi arrived in Dhaka on a three-day visit on Saturday afternoon to discuss the Rohingya issue with the government and see their situation in Cox’s Bazar camps. ##