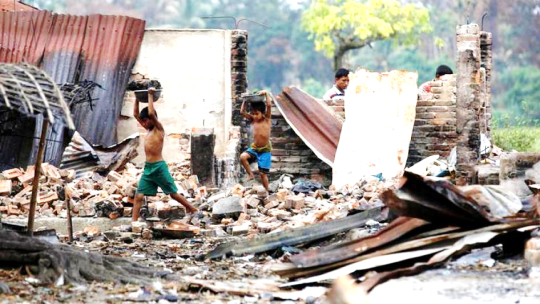 Children recycle goods from the ruins of a market which was set on fire at a Rohingya village outside Maungdaw in Rakhine State, Burma, on October 27, 2016. © 2016 Reuters

(Rangoon) – The Burmese army announced on May 23, 2017, that its investigation into alleged military abuses in Rakhine State uncovered no wrongdoing except in two minor incidents, Human Rights Watch said today. The army’s failure to find its troops responsible for any serious abuses against ethnic Rohingya since October 2016 in northern Rakhine State demonstrates the urgent need for Burma’s government to allow unfettered access to the United Nations international fact-finding mission.

The army investigation team, led by Lt. Gen. Aye Win of the Office of the Commander-in-Chief, reportedly interviewed approximately 2,875 villagers in 29 villages in Rakhine State’s Maungdaw Township from February 10 to March 4. The team said it recorded the testimonies of 408 villagers, and interviewed more than 200 soldiers and members of the border guard police. However, to have interviewed the number of villagers it claims to have spoken to, the team would have had to interview at least 125 people each day while in Rakhine State.

“ The army’s approach highlights the need for Aung San Suu Kyi’s government to allow the UN fact-finding mission into Burma, and to call on the army to provide full access to conflict areas.”                       ▬  Robertson, Deputy Asia Director

The army investigation reported finding two cases of abuse. One involved the theft of a motorbike, for which a soldier was sentenced to one year in jail and received a fine. The other involved military personnel who beat villagers for allegedly not helping to extinguish a fire, for which one officer was “penalized and warned” and two soldiers were sentenced to a year in jail. The investigation team also concluded that the allegations against the army in a report by the UN Office of the High Commissioner for Human Rights were either “totally wrong” or “found to be untrue due to false accusations and exaggerations.”

The UN, Human Rights Watch, and others have documented numerous serious human rights violations committed by Burmese security forces against the Rohingya in Rakhine State following the October 9, 2016, attacks on three police outposts. Human Rights Watch documented extrajudicial killings, the rape of women and girls, and the burning of at least 1,500 structures. The violence caused massive displacement, with more than 70,000 fleeing to Bangladesh and more than 20,000 temporarily internally displaced. A report issued by the Office of the High Commissioner for Human Rights on February 3, concluded that the attacks against the Rohingya “very likely” amounted to the commission of crimes against humanity.

The Burmese government established four separate commissions to investigate the violence, none of which have been credible or impartial. In March, the UN Human Rights Council passed a resolution establishing an independent international fact-finding mission with a mandate to investigate allegations of recent human rights abuses in Burma, especially in Rakhine State. The Burmese government has not said whether it will grant access to the mission.

Past Burmese government investigations have exposed deep methodological flaws and lack of care for victims and the collection of accurate testimonies. The Union-level investigation commission, led by Vice President Myint Swe, has used methods that produced incomplete, inaccurate, or false information. According to reports, testimony, and publicly released footage, the Burmese investigators badgered villagers, argued with them, told them not to say things, accused them of lying, and interviewed victims – including rape survivors – in large groups where confidentiality was not provided.

The Union-level commission released an interim report on January 3 that summarily dismissed allegations of genocide, religious persecution, and states that it was unable to find sufficient evidence of other abuses. The commission has yet to issue its final report and there is no set date for its release.

“Despite overwhelming evidence of mass atrocities, the Burmese army has again failed to credibly investigate itself,” Robertson said. “For there to be any hope of uncovering the truth, the Burmese army can no longer be standing in the way of a serious international fact-finding mission.”