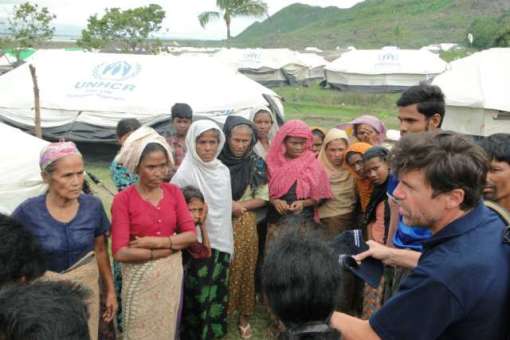 Rohingya Muslims in Myanmar are considered to be among the world’s most persecuted peoples, subject to what the UN calls “crimes against humanity,” and hundreds of thousands are now refugees in neighboring Bangladesh, where Cardinal Patrick D’Rozario is defending their right to “dignity.”

Cardinal Patrick D’Rozario of Bangladesh, where Pope Francis is expected to visit later this year and where Rohingya Muslim refugees from Myanmar have to date received a decidedly uneven reception, said on World Refugee Day that these new arrivals are “human beings who have a right to dwell in their own traditional way.”

“They have a right to live where they have been living, but now they are refugees,” said D’Rozario, made his country’s first-ever cardinal by Pope Francis in November 2016.

The Rohingya are a Muslim minority in largely Buddhist Myanmar, also known as Burma, who have been fleeing in the face of rising levels of persecution, including rapes and extra-judicial killings.

A UN report in February described their situation as a possible “genocide” and a set of “crimes against humanity” in Myanmar, where the Rohingya are officially categorized as Bengali “interlopers” despite the fact they’ve lived in Rakhine for generations.

They’re subject to what the UN also called a “campaign of terror,” and enjoy no citizenship rights – in effect, they’re stateless.

Often the Rohingya try to reach neighboring Bangladesh, which has an official policy of trying to make them unwelcome. Despite that ambivalence, as of early 2017 the United Nations estimated some 300,000 to 500,000 Rohingya were living in Bangladesh.

D’Rozario credited his country with being “receptive” and “providing emergency aid,” but told Crux that “international pressure is required for a long-term solution.”

“It is also the responsibility of neighboring places to seek a permanent solution to this refugee crisis,” he said.

D’Rozario acknowledged the efforts of Catholic groups in Bangladesh to assist the Rohingya, including Caritas, the international umbrella group for Catholic charitable organizations.

“The Rohingyas are being denied the right to habitation, they are living in desperate conditions, [and] they are frustrated,” D’Rozario said. “Refugees have a right to live with dignity and security.”

Pope Francis has spoken out repeatedly about the plight of the Rohingya. He did so for the first time in August 2015, during a session with youth in Rome.

“Let’s think of those brothers of ours of the Rohingya,” he said. “They were chased from one country and from another and from another. When they arrived at a port or a beach, they gave them a bit of water or a bit to eat and were then chased out to the sea.

One month later, he brought the Rohingya up again in an interview with Portuguese radio.“Further away from Europe there is another phenomenon which hurt me deeply: the Rohingya, who are expelled from their country, get into boats and leave,” he said.

“They reach a port or a beach, and they are fed and given water and then sent out to sea again, and not taken in. There is a lack of capacity for welcoming humanity.”

Francis came at the subject again in February, saying on the Church’s International Day of Prayer and Awareness against Human Trafficking that “they have been suffering, they are being tortured and killed, simply because they uphold their Muslim faith.

“I would like to pray today with you in a special way for our brothers and sisters Rohingya,” the pontiff said.

“They are driven out of Myanmar, going from one place to another because they’re not wanted. They’re good people, peaceful! They aren’t Christians, they’re good [people]. They’re brothers and sisters of ours,” he said.

The remarks were spontaneous, suggesting the issue is close to Francis’s heart.##