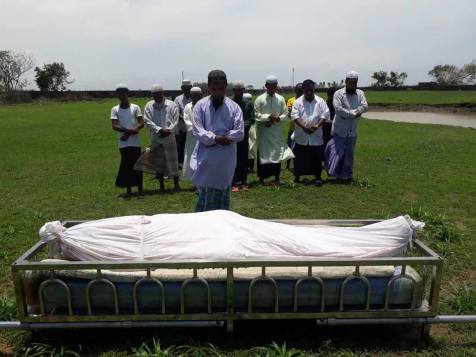 A detainee arrested during last year’s crackdown have died on Thursday following intense torture in custody, according to multiple sources.

35 year Habib Ullah (s/o Sharif Hossain) is one among more than a dozen other people from Dunsay in Rathedaung who were taken away by the security forces during the last days of the crackdown.

He and 12 others were later transported to Akyab jail.

Many others who were arrested along with Habib were later released. They said all of them, including Habib faced brutal torture in custody for holding peaceful protests against atrocities committed by Tatmadaw led forces. Many of those released have showed our local correspondent that their bones were broken due to beatings in custody. Habib and 12 others were however not released and instead taken to Akyab jail where they continued to be tortured, according to local sources.

Habib’s funeral was held on Friday afternoon and he has been buried in Akyab.

Custodial torture has killed and maimed hundreds of Rohingya prisoners in the last few years. Many have died slow painful deaths after being continuously beaten day after day for months. Prisoners have described gruesome torture techniques like being ‘beaten like snakes with iron rods’ and ‘breaking body parts starting from each finger’.

A video that later went viral on the social media also showed police lining up and brutally assaulting Rohingyas in Dunsay for holding peaceful protests. ##