Suu Kyi receives award on visit to UK despite protest

LONDON: Aung San Suu Kyi was awarded the honorary freedom of the City of London on Monday, as a small group of demonstrators protested outside about the treatment of minority Rohingya Muslims.

Myanmar’s de facto leader received the award at the Guildhall, after meeting with Queen Elizabeth II and heir to the throne Prince Charles on Friday.

The award was in recognition of her “non-violent struggle over many years for democracy and her steadfast dedication to create a society where people can live in peace, security and freedom”, the City of London said. 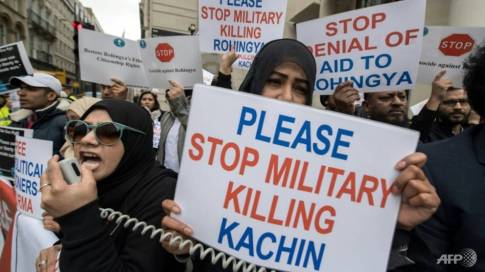 Nobel Peace Prize laureate Suu Kyi is on a tour around Europe that has already taken her to Belgium, Italy and the Vatican City.

On Monday around 40 demonstrators protested outside the Guildhall, with signs reading “Free All Political Prisoners in Burma” and “Please Stop Military Burning of Rohingya Villages”.

Protesters rallied against Aung San Suu Kyi as she received the honour.

They chanted “Suu Kyi is lying; Rohingyas are dying” and said that people who had once supported her now opposed her.

“We believed that she would be a champion of human rights but she has been complicit with … the junta murdering innocent Rohingyas,” one speaker said. 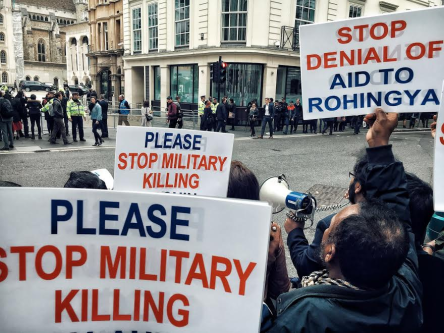 Protesters rallied against Aung San Suu Kyi as she received the honour.

Last week Suu Kyi rejected a decision by the UN’s rights council to investigate allegations of crimes by Myanmar’s security forces against Rohingyas.

Myanmar is scheduled hold peace talks this month aimed at ending decades-long ethnic wars that have intensified since Suu Kyi’s party took power a year ago.

She then met Pope Francis and Italian Prime Minister Paolo Gentiloni while in Rome on Thursday.

The video is the copy rights of Press TV.